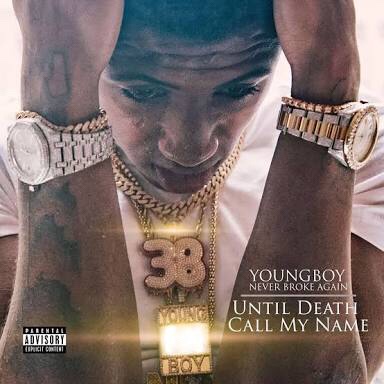 Hanging by a thread, YoungBoy Never Broke Again’s career continues to be threatened by a myriad of bad decisions. From domestic abuse to attempted murder, it’s hard to tell if the young Baton Rouge rapper will be level-headed enough to extend his career beyond a couple of years. With that being said, NBA’s debut album, “Until Death Call My Name,” is an important one for him, as he gets a chance to show the world that his talent is capable of overshadowing his troubling actions.

This song is on the deluxe edition of this album, and I’m wondering why. The hook is so damn emotional and infectious, while the lyrical substance you get from YoungBoy is nothing less than chilling. You have to check this track out.

‘Overdose’ is the definition of hood riveting. It opens up with Youngboy Never Broke Again justifying all the bad s**t he’s done in his life, and what follows is an all out diatribe from him that comes across as paranoid, violent and a downright savage. What I like most about the song is that he raps so aggressively on it, pouring his heart and soul out on every bar he delivers.

“We Poppin'” is what I like to call one big hood celebration, as Youngboy Never Broke Again goes in singing-wise over this bass-heavy/cheerful instrumental. If I were to guess, this track was inspired by his ascension to the top, and he wants everyone from his hood to feel that success, too.

Part of me thinks Birdman’s feature is dope, as he plays this fatherly figure that teaches NBA how to mimic his ballerific ways. But at the same time, I feel like his part is a bit unnecessary, because he doesn’t quite match NBA’s energy on his verse. Nonetheless, I love the NO endorsement from Stunna here.

If this song doesn’t make you want to pop some bottles, I don’t know what will. (Too bad NBA isn’t legal to drink)

I feel like “Preach” should’ve been called overdose. The dude literally said he has plenty of drugs in his system on it.

I feel like NBA’s style of rapping on this song is the best on the LP. He raps so loosely, making the emotional instrumental come alive by simply blessing us with honest lyrics. Just like the title, his words on this song will make you say “preach,” as you listen to the terrifying yet real ass words of advice he gives the world on his verses.

This song features one of the best instrumentals on the album. On it, Youngboy Never Broke Again raps about the mess his life is as he questions himself — “Is it all worth it?” The bass guitar also gives the sound a creative touch.

I started getting into hip hop around the time Cash Money blew up, so excuse me if I think this song is tighter than you think it is. Anyway, on it, YoungBoy gives us something gritty, updating Lil Wayne’s breakthrough “Block Is Hot” hit. I like the tenacity the Louisiana native raps with on his verses, as he embraces his role as the next Pac.

Let’s be real, Youngboy Never Broke Again has probably been through more s**t than 65% of the human beings walking this planet. And much like a good number of the rap artists that has been through the same s**t as him, the pain that came from overcoming his demons is shown throughout his music. On “Until Death Calls My Name,” YoungBoy shows this level of passion for being able to live his troubling life out so much on this album that listening to it might give you a new found appreciation for your own. He’s emotional, he’s explosive, and like I said earlier, very paranoid. At times, the Louisiana born artist is able to package some of those characteristics into a catchy song, delivering melodic hooks and aggressive raps, but in others, his pain is just flat out overwhelming.

It isn’t only Youngboy Never Broke Again that is full of emotion on this album, the production he chose to rap over also gets in on the fun, too. I feel like on nearly every track he raps over, there is this jazzy/hip hop sound that mixes the chill vibes of a local bar on Bourbon St. with the gritty nature of the old Magnolia projects. It exudes so much energy from Youngboy, which is the driving force behind this album.

I used the word passion a lot on this review, right? Well that’s the primary and most important factor of this album. You can tell Youngboy wanted to make sure you felt this record just as much as you heard it, something I refuse to take for granted — especially considering his age.