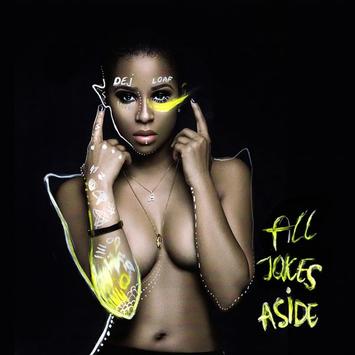 Believe it or not, Dej Loaf has yet to release an album. She has had an EP, a few promo singles, and a Mixtape to date, but still no album. Though this is not an album, it still seems a bit promising when it comes to fire.

This track probably has the most stomachable verses on this album. The problem is that everything else isn’t that good on this song. Where are we following you to Dej Loaf? You’re asking who you are, and who I am? I’m The Ratings Guy, and who are you? The girl that the Ratings Game Guy is bout to put on his wall of shame as soon as possible after this Mixtape.

I think these are the kind of tracks that Dej Loaf succeeds in; It’s gentle, and allows her to showcase her R&B sound a little.

Don’t ask me what she’s talking about, because I have no clue. She’s yapping hard on this track.

Though her rapping is atrocious, and the song sounds like “A Rugrats rap”, it is still very catchy! The chorus is real, and just complex enough to keep you interested.

Sounds like Dej is trying to use the Juvenile ‘Ha’ flow…..Please don’t do that again, Dej.

No Limit loves the title “Bout That” don’t they?

I like the hood yet emotional sound of the beat on this track. It’s a good setup for Silkk to kill.
Believe it or not, Silkk kills his verse! HE’S ACTUALLY FLOWING ON THIS TRACK! (THANK THE LORD!)

‘Chase Mine’ has a very fun-loving vibe to it. The beat reminds me of a Common/Kanye West track from back in the day.

Though it sounds like a feel-good song, Dej Loaf is still rapping hard on it (which I’m convinced is the only way she knows how to rap). She is definitely riding the beat well on this track, and absolutely kills the chorus.

She said lately she been on her rap S–t….Maybe she means wrapping gifts, cause what I heard was barely rap s–t.

This is the first ever Mixtape I gave a rating of ‘YIKES’. I’ma be honest, her lyrics on most of the album is awful! It sounds very amateur. Her flow is unbelievably bad on several of her songs, too. Ironically (or maybe purposely), she sounds like Silkk Tha Shocker on most of the songs, and that is definitely not a good thing.  I used to rap when I was a kid on a cassette radio, and most of this album sounds slightly better than this in quality.

She sounds so uninterested on this Mixtape that she even stops rapping to talk to her homies on some of the songs….LMAO!
The positive take away from this album is that her choruses are not that bad… Some of the choruses are actually pretty good! Dej definitely has a nice voice….

This Mixtape is not good, point blank period. Quentin Miller might need to be her ghostwriter ASAP.