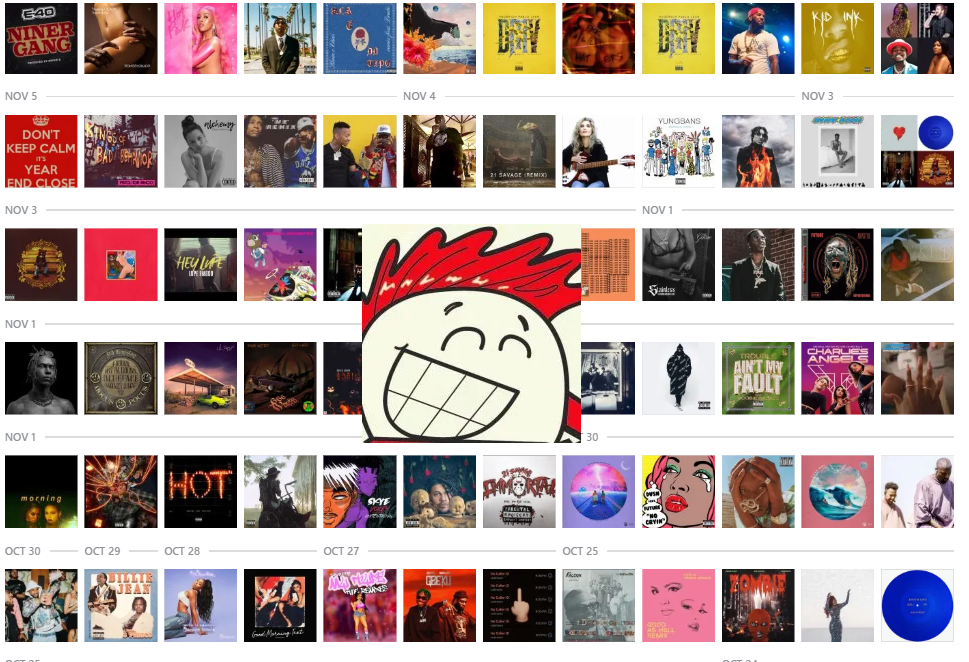 REVENGE OF THE DREAMERS III

According to our readers, the best album from 2019 was Revenge Of The Dreamers III. While it may not be MY favorite album, I do understand why people loved it. For starters, on the album, you get some pretty raw hip-hop music. Additionally, you get cold R&B cuts, classic J. Cole verses, and some pretty dope features. All in all, I feel like Revenge of The Dreamers III symbolizes what it sounds like to hear a full body of work by artists that really do love hip-hop music.

Excuse my french, but I f**king love Civil War by Russ! I love the subject-matter behind the song and absolutely f**k with Russ’ ability to mix a serene singing with a gritty rapping on it. As someone who listens to hundreds of songs a year, I couldn’t help but go back to Civil War over and over again.

I loved so many albums this year. I thought Wale had a great album in Wow… That’s Crazy, I loved Roddy Ricch’s Please Excuse Me for Being Antisocial, and thought that Machine Gun Kelly had a very slept on album in Hotel Diablo. At the end of the day, the album I loved the most this year was ! Bazzi’s Soul Searching. To me, the Michigan singer had hits on it, he had humble cuts, pop bangers, and joints that just hit your soul. I know you may disagree with my pick here, but at the end of the day, this is my list, chump!

I think Spaceboy Uno is way too talented for his own good. Not only can he rap his ass off, but I think he’s really good at picking beats and singing, too. In Detached, Uno does everything he’s good at very well, and also lets the world into his fragile/cocky mental.

I think Shreya Preeti is absolutely amazing in Junkyard! Not only is her soulful singing on the track outstanding, but I absolutely love how the song practically does everything in its power to pull at your heartstrings. I mean, everyone has been in a situation in which they’ve been left in a junkyard, right? (I voluntarily stayed in a junkyard myself a few years ago)

You know what sucks? So many Afropop songs get praise years after they came out here in the states. Well, on this site, we are going to acknowledge a song that came out this year, dammit!

On the real, most of the songs Burna Boy came out with this year were crack cocaine; one of my favorite lines of crack by him was Pull Up! Though most music lovers would pick other songs by Burna to love, I personally feel like Pull Up, a song that grew on me throughout the year, features a version of the Nigerian musician that sounds universal, veteran-like, and sly. But at the end of the day, you can plugin any Burna Boy song from this year into this entry and I would be content.

CHANCE THE RAPPER – LET’S GO ON THE RUN

Unfortunately, I thought Chance The Rapper’s The Big Day album was very cheesy. (Welp, we know which album won’t win ‘Album Of The Year’) To me, one of the cheesiest songs off of the album was Let’s Go On The Run.

Don’t get me wrong, Let’s Go On The Run isn’t a bad song, I just think Chance’s relentless effort to sound like Roger Rabbit on the song was a swing and a miss. (Don’t even get me started on Knox Future’s bizarre ass singing on the track).

The beat attached to “So Brooklyn” sounds like some legendary New York s**t! Not only does it feel riveting as hell, but it also has elements attached to it that will make you want to spit serious bars. Luckily, Casanova and Fabolous spit hard on the track, reminding the world that the east coast has the best MCs in the game.

DRAKE ON “NO GUIDANCE”

Every year, Drake beefs with someone, and then, the following year, he becomes friends with them. In the case of Chris Brown, Drake beefed with him, became friends with him, beefed with him again, and became friends with him again. Right now, the two are friends, and what they were able to create as friends was a silky smooth banger in No Guidance that features old school Drake, old school Chris, and a back and forth that was damn-there cinematic. Damn, I loved your positive energy, 2019!

RODDY RICCH – RACKS IN THE MIDDLE

Before Nipsey passed, I knew he had a hit with Racks In The Middle. Yes, the verses you get from him in the song are great, but on the real, it’s the hook Roddy delivers in the song that blows me away. Not only is it gangsta, but something about it also feels legendary.

The women ruled hip-hop this year, especially in the adlibs department. With that being said, my favorite adlib this year was “Period” by City Girls. To me, anytime either Yung Miami or JT said, “period,” s**t got real. The duo also said “period” at times that the word didn’t call for it (That’s how you know a word is a strong one, you can say it when it doesn’t make sense).

J. COLE’S VERSE IN “THE LONDON”

J. Cole’s verse in The London has everything: Clever punchlines, a few different flows, bars club-goers will love, tons of wittiness, some singing, and serious arrogance. The combination makes for some s**t that will get you hyped as hell.

Just read the s**t that Lil Pump says in “Be Like Me:”

Everybody wanna be like Pump (ooh)
Everybody got fake dreads and love to take drugs (yeah)
Once you this rich, you do whatever you want (huh?)
Yes, I’m hella ignorant, I don’t give a fuck
And everybody wanna be like Ye (Ye)
Everybody wanna go and smash Kim K (ooh, yeah)
You can talk shit about me everyday (day)
But I’m still rich at the end of the day
I take drugs like it’s vitamin C
I’m a millionaire, but I don’t know how to read (nope)
I’m a role model that these kids wanna be (ooh)
I just smashed a pregnant bitch that’s overseas (yeah)

Bragging about not knowing how to read, smashing pregnant girls overseas, having fake dreads and loving to take drugs is cool now? Am I missing something? (I know my brain cells aren’t missing)

MOST SLEPT ON ALBUM

Mike Posner looks like he smells like left out meat these days, but what he looks like has not had a barring on the music he’s been making as of late. With that being said, I believe “Keep Going” is one of the best albums/mixtapes I’ve heard in 2019! On it, Mike practically plays a motivational hip-hop figure that constantly reminds us why we should strive for greatness in our lives. While the powerful lyrical content Mike hits us with in the mixtape will come for your life nonstop, it’s also the way the mixtape is orchestrated that should catch your attention. If you haven’t heard “Keep Going,” please do!

I am appreciative of what Chief Keef has brought to the Chicago hip-hop game, but if I’m being completely honest with you, he is a very bad rapper these days. In “The GloFiles 3,” I believe Keef reaches rock bottom. Not only do you get God-awful singing on the mixtape from him, but you also get beyond meaningless lyrical content, too. If you are one of those people that get queasy easily, stay away from “The GloFiles 3.”

There is so much s**t about this song that is off… First off, the song OT Genasis is trying to flip isn’t called “Never Knew,” it’s called “Love.” Secondly, who in the world allowed this guy to sing like his life depended on it on a track? Jesus, OT, this is bad!

I am no longer shook when I see that I have a new comment on this site, as these days, most are positive (Whew)! This year, one of the comments that caught my attention the most was a semi-negative one by superstar rapper NAV!

Umm, I don’t think you have been following NAV for a long time, Bad Habits is the best album out of PT2, NAV, and Reckless. It’s also #1 on the charts. Fire album

I actually agree with you, this is YOUR best album (never said it was or wasn’t). I still prefer “NAV”, though 🤷🏾‍♂️! And trust me, I’ve been following YOU closely.

GOOD JOB and thanks for reading, Nav!
Thanks for the comment, too, Nav!

LOGIC –  CONFESSIONS OF A DANGEROUS MIND

Initially, I thought “Confessions Of A Dangerous Mind” was a pretty dope album (I thought the songs on it were very fun to listen to). However, the more and more I played it, the more and more I thought it was corny as s**t. While I still f**k with Logic’s rapping on the album, I can no longer get jiggy with his cheesy approach to hit-making on the album anymore. To make a long story short, I feel like Logic’s career-long identity issues manifested itself into a full-out f**k boy body of work in “Confessions Of A Dangerous Mind.”

I didn’t want to rate “Some Rap Songs” so bad, I posted a wrong link to it when it first came out. Can you blame me, though? The artwork to the album looks bad, the name of the album sucks, Earl Sweatshirt sounds grossly offbeat on every single song on the album, and the beats on the album sound like when Nintendo games f**k up and you have to blow it. But at the end of the day, I appreciate Earl giving us an unadulterated version of himself that refused to succumb to social norms on the album. Earl also spit out bars that were so wisdom-filled on the album, it took weeks for me to fully understand some of the things he said.

Shoutout to my boy Tommy Monroe! His words in his article about “Some Rap Songs” definitely made me appreciate it even more!

Initially, I thought “Best Friend” was the best song off of “Baby On Baby” — Not “Suge,” not “Baby Sitter,” not even “Walker Texas Ranger.” Maybe it’s my love for XXXTENTACION that drove me to overrate “Best Friend” (The song flips XXXTENTACION’s ‘sad’ track), or perhaps I drank way too many f**king IPA’s that day. Whatever the case may be, I got my top 5 songs off of the “Baby on Baby” album pretty wrong (Don’t get me wrong, I still f**k with “Best Friend” a lot)…

Listen to Richard Mille Plain either at a late night drive or going out for a swim at night. The song too good i’m sorry.

Up top is a comment left by Rorito regarding Gunna’s “Richard Millie Plan” song (aka the greatest song ever assembled). While many on my site agreed with Rorito’s assessment of the song, I did not, as I gave it a 2.5/5 stars. I guess I have to illegally jump into somebody’s dusty ass swimming pool to fully understand RMP’s greatness! (BTW, thanks Rorito for reading and commenting!)

Once again, I want to thank you all for the support you’ve given this site this year! 2019 was bigger than 2018 for us. Not only did we eke out 2018 in views, but we also grew our site to levels that I never imagined we would grow it to. As usual, it’s you guys that keeps this site going, and in 2020, expect more and more growth!